When we get new local numbers tomorrow, I’ll update them, and the little graphs that go with them.

But for today, here are some almost-up-to-date big graphs that show a good representation of what’s going on. The one on the left is the daily new-case counts, layered by province. They all start from a common point; not in time, but when each of those provinces reached 100 cases, back in March or April… and then show what’s happened since then. The one on the right is the same thing, but graphed logarithmically with the top red national line removed. It lets you see the present trends, and how they compare against Time-to-Double lines, as well as each other. The concerning one there is Manitoba, whose angle incline is greater than anyone else’s… but, to be clear, all of them are angling up.

Which brings us to the more relevant point… of last night, and the videos surfacing of what looks like a good old-fashioned Saturday night on Granville St. I’m actually not even sure what venues on Granville are open; I thought they’re all closed for the moment… which leads me to ask an obvious question – what was the point of gathering downtown? Like, to what end? Where are you going or coming from? I don’t mean it to sound like I’m some clueless old fart; this isn’t a rhetorical question. Back in the day, where we walked uphill 5 miles both ways to-and-from downtown, there was a reason. There was a club we were going to or coming from… Luv-a-fair, Twilight Zone, Graceland… it’s a longer list, but the point is – that there *was* a point. “Hey, let’s just go stand around on Granville St.” wasn’t a thing. And in the middle of a pandemic?

“What’s the big deal?”, ask a whole bunch of self-centered clueless people on Twitter and Facebook and everywhere else. People want to party. You can’t keep people inside forever. It’s just a flu.

Those yellow lines on the graphs are B.C. The graph on the right more prominently shows the upward bend that began about a month ago. Note that it’s a logarithmic graph… so things are actually a little worse than how they look here. How much worse can it get? Look at the brown Manitoba line, and what it’s about to do. There’s every reason to believe that we’ll be following a similar trend if nothing changes.

After posing a few questions yesterday and now reading the answers, I realize (as expected) that I’m very much preaching to the choir. Most people believe in science, and the logical conclusions which follow from it. You’ll wear a mask when and where it makes sense. You’ll get the vaccine when it makes sense, ie, probably not right away until you’re convinced it’s safe and not rushed to the public, but certainly will in due course. I agree.

Yet – not everyone agrees… and, as it turns out, this is indeed the simplest way to think about this… if you’re repudiating vaccines and masks, you’re basically saying you don’t believe in the science behind it… which really means you don’t believe in science at all. You can’t pick and choose scientific conclusions simply on the basis of what you want to believe. And if you think the scientific method as a whole is some sort of flawed concept, then there’s really nothing I can say to change your mind.

The answer to the ridiculous rhetorical question of “So what?” will be answered in the next 5 to 21 days as that golden yellow line creeps upward and to the right, its angle of incline slowly increasing. 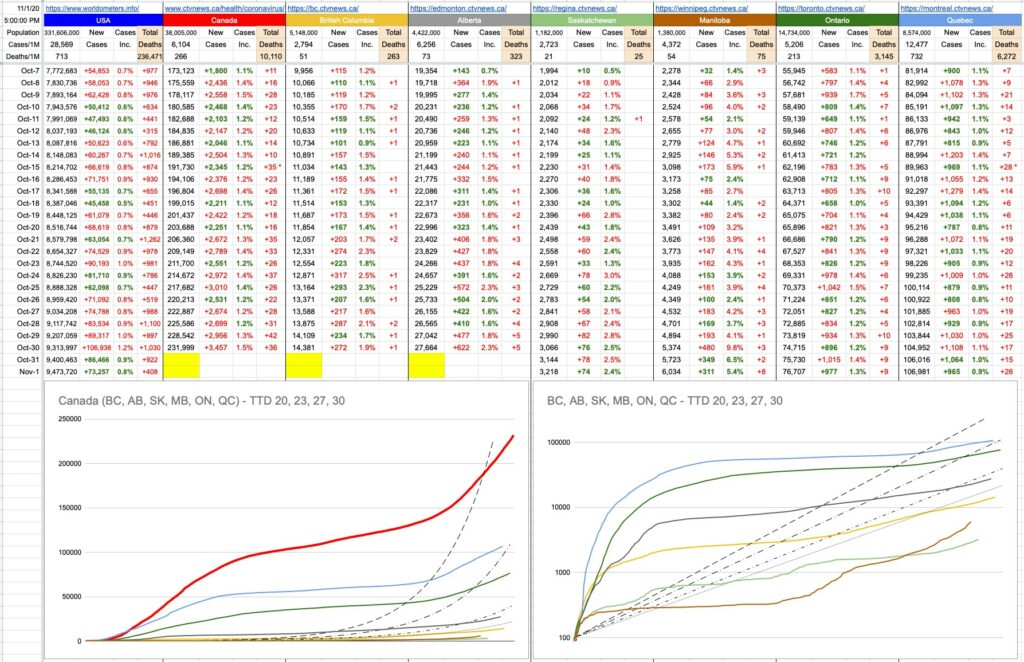