The “politicization” of Covid-19 is really quite interesting to observe. Perhaps the right word is “weaponized” – with the U.S. being the best example. Forget the reality of it; there will one day be “Covid denial” – it’ll be something that “maybe didn’t really happen”, was “exaggerated”, was “fabricated” for “sympathy” or “political gain”… the same nonsense every other flavour of denier likes to preach.

The discussion in the U.S. that’s now appearing is puzzling when based on reality, but perfectly in-line with the paragraph above… that, given that C19 is a political fabrication, invented to damage the presidency of Donald Trump, as soon as the election is over, it’ll all just go away. Win or lose, the whole pandemic will have served its purpose.

Of course, after November 3rd, and continuing into the future, long after all the ballots have been cast, guess what… C19 will still be here, numbers will be surging, and people will keep dying. I wonder what the deniers will have to say after that. Actually, there’s no need to wonder; we can just assume it’ll be as confusing and misguided as what we’re hearing now.

So, let’s ignore the complete bullshit, and talk a bit about the more subtle bullshit. The White House Chief of Staff, twice now, has basically admitted that there’s no plan to control the pandemic. This is not really news, though it’s nice and surprising to hear some honesty so close to the source of misinformation itself. Unlike his boss, Mark Meadows isn’t saying it’s getting better. That it’s turned the corner. That it’ll be over soon. That the vaccine is just around the corner.

To put it in different terms, what he’s saying is this: “We have been lying for a while, knowing full-well that the messaging and actions we’ve put out are not going to work, and never would have, especially given the polarized electorate we have today… so, we chose to lie, and paint a rosy picture… long enough to get re-relected. We know a lot of people will die as a result – deaths that could have been avoided. But, it’s more important to us to get re-elected, and if enough people are sold on the idea that we’ll have a vaccine sooner than later, we should be ok. And one day, we will… so… ”

The extension of this polarization will yield two camps of future thought; I’ve summarized one of them. The summary for the other school of thought is more simple: they will claim Trump and his administration should all be charged and tried for Crimes Against Humanity. They will have a good point.

Closer to home, the vaccine isn’t a hoax around here either… and we have numbers to prove it. The weekend update was nothing short of ugly. New measures will be put in place limiting crowd sizes, as we slowly slide backwards and see higher and higher numbers.

We’re certainly on the upswing…. but how far up will it go? I won’t attempt to predict the future, but looking at the numbers and graphs, you might be tempted to think that Quebec is flattening out their curve… and they’re perhaps three weeks ahead of us… so is it fair to think we are in for three more weeks of frightening growth before it flattens out? Depends how well we mitigate that risk. As usual, it’s up to us.

Three weeks from now is just after the Remembrance Day Weekend… hopefully that weekend update isn’t as startling as this one. 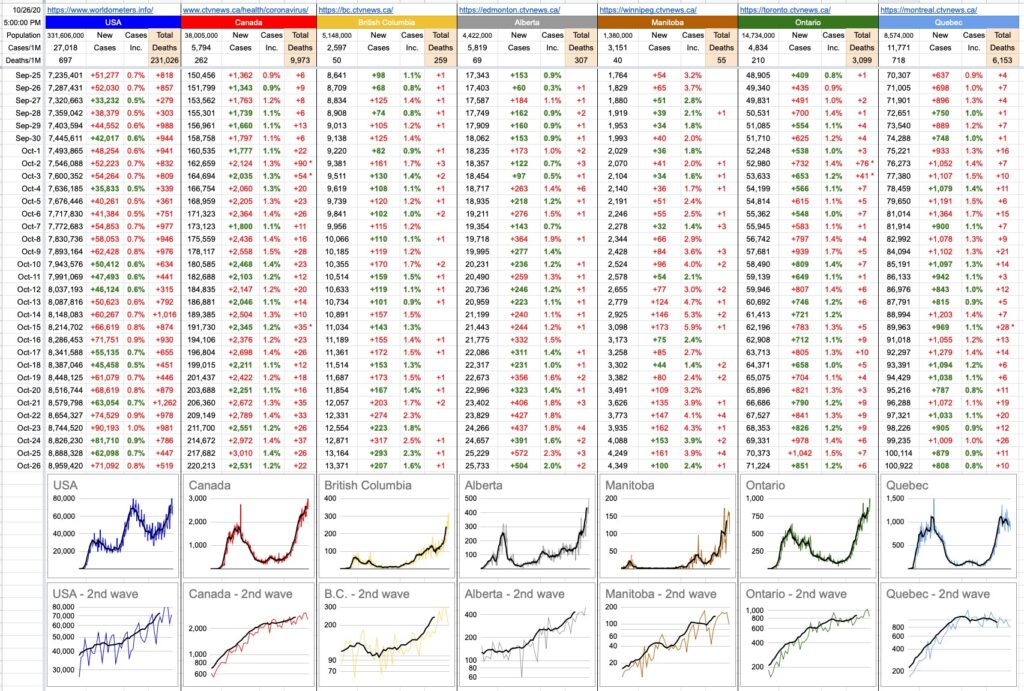