There’s no way I was going to let today go by without posting something… because today is St. Patrick’s Day, the two-year anniversary of when I started writing about the pandemic.

Facebook is kind enough to remind me of that, so I’m attaching that original post below this one, as well as the one-year anniversary post from last year. It’s funny looking back at these, for two very-different reasons.

The one from two years ago is ridiculously naïve, and, in hindsight, why wouldn’t it be? Nobody back then knew what was going on at all. This was all new to us, and we all quickly got used to seeing graphs with various curves… and our attempts to bend them. This post preceded all of that, but alluded to what the short-term future was all about. “Just three weeks”, etc. Ah, the good old days.

Last year’s post was exactly a year later, and we all had a pretty clear idea of exactly where things were at. But it was also naïve… me talking about how the end of all of this is just around the corner. Well, it felt that way… vaccines in our midst and diminishing numbers. Here comes summer!

So, it’s with trepidation that I try to predict anything this time. Last year, we’d heard of the Delta variant, but nobody seemed too worried about it as the vaccines would handle it just as effectively. Omicron was months away from existing. We were more worried about China than Russia. How things change.

Depending where you are and who you believe, your opinion on the pandemic is bounded by two possibilities: One, it’s over and no longer a big deal… if it ever was one. Or two, it’s very much not over… and we might find ourselves right back at square one if we’re not careful.

If option 1 is zero and option 2 is 100, my personal opinion is that we’re at a 28… and, optimistically, dropping. I think we’re really not going to know until much later in the year. If winter and a new variant once again conspire to arrive at the same time, there will be another wave… and, along with it, a lot of discussion as to whether this wave is part of an endemic future or a pandemic present for, yet again, one more go-around.

I could sit here and speculate some more, but there’s not much point. My brain is elsewhere… specifically, Cancún, as per the attached picture. No graphs, no charts, no numbers. But it does have beauty and serenity and a bit of green to honour the day.

A few minutes after the picture you see was taken, I was in it somewhere… and for what’s left of this trip, I’m trying to keep my brain somewhat disengaged.

Happy Saint Patrick’s Day and Happy Two-Year Anniversary — I raise my green-infused tequila shot to you… served by a mask-wearing waiter, but surrounded by mask-less people partying like there’s no tomorrow. That — in itself — is probably just as good a summary as to where we’re at.

It’s been a while since I watched the Dr. Henry update, but I did today, if for no other reason than the fact that it’s going to be the last one… at least as far as scheduled ones are concerned. Two years ago, and for many subsequent months, you’d have found me glued to the screen on a daily basis, watching intently and trying to figure out what the hell is going on. That was my daily question, and the answer always was… “We’ll see.”

Today’s final press conference, close to two years to the day of the first one, came with some announcements that were expected… and will make some people very happy, and others not so much…

One big question people have been wondering about is when do we see the end of vaccine passports, and the answer is – assuming things remain on the path they’re on – April 8th. The provincial requirement for vaccine passports goes away April 8th and, in a perfect world (don’t we wish), stays away forever. We’ll see.

The other biggie is, of course, mask mandates: Also gone, as of midnight tonight… and notwithstanding some minor exceptions (medical settings), places like restaurants and concerts and hockey games will no longer require them. But let’s clarify that… restaurants will no longer be required to require them. I am guessing there will be some places who will be hesitant to just say it’s open season, and that’s likely to cause some problems. Some people will be offended that the person next to them is voluntarily wearing a mask. For others, it’ll be the exact opposite. Some restaurants, for their own reasons, may choose to stick with it… not for the scientific, but for the psychological reasons. We’ll see.

There is a huge, and I do mean… huge… difference between the science and the psychology of where we are today. I realized that recently when walking into my house and subconsciously reaching for my mask. Part of my brain is now on that autopilot; going from outdoors to indoors? Put on a mask.

That sort of autopilot has saved my life, literally… on a few occasions walking the streets of London. Here’s some advice, especially if you’ve never been there: When you’re crossing the street, look both ways. It’s that simple. Don’t try to think about traffic and where it’s coming from and where it’s going and who’s turning to and from where… just look both ways. I once came within inches of getting hit by a bus because I was quickly going to cross the street and there was nothing off to the left. Of course there wasn’t, because that’s not how it works over there.

So how’s it going to work over here? A mask or no mask is unlikely to be a matter of life and death, but the psychology of un-training our brains may take a while. I have a tremendous amount of empathy for people who aren’t automatically young and healthy and fearless. I feel for teachers who are worried about the fact that all students K-12 will no longer require masks after Spring Break.

I feel for them because the fear that’s been around for two years doesn’t go away so easily. Obviously, at some point, the mask mandate has to go away, and it’s the science that’s driving that decision today. But no matter when that was going to be, it was going to result in a lot of issues… and here we are. For a long time, we’ve been told we’re wearing masks for the benefit of others… but long after Covid is gone, there will be people with masks… and in that case, it’s entirely for themselves and their mental well-being. Whether it’s tomorrow or in 6 months or in 2 years, you will see people with masks. To quote our fearless Dr. Henry: “Be kind, be calm.” Perhaps the “Be safe” part of it is not so relevant anymore, at least not for you. But it is, and will remain so, for others.

Speaking of what’s relevant and not… I’ve been wondering for a while how long I’ll be updating these numbers and charts. “Until they’re no longer relevant” is my inward-facing answer to that. Does any of this mean anything anymore?

For a long time, case counts meant everything. Cases turned into hospitalizations and ICUs and deaths, etc. Well… it’s been a while since the daily case numbers have meant much. Testing protocols have changed… and while, for a long time, we knew that reported cases were significantly undercounting reality, we never knew by how much. That’s never been more true, to the extent that the published numbers no longer mean much at all… so much so that many jurisdictions are no longer publishing them on a daily basis, if at all. You’ll see a lot of italics in today’s chart… those are interpolated numbers. If it was 170 last week and it’s 100 today, you’ll see it stepping down by very pretty and consistent and italicized “10” on a daily basis. Does that really mean anything at all? Honestly, not much. But it’s better than blanks and then a big jump. And, to be fair, it’s a relatively fair view of a trend… though, again, the trend isn’t actually as important as simply: Where are we today?

Today, B.C. has around 400 Covid hospital cases. That number was close to 1,000 a month ago. Also today, B.C. has 58 Covid ICU cases. A month ago, it was close to 150. To the extent this has always greatly been about managing the pressures on the health-care system, we’re nowhere near frightening levels, and continue to head in the right direction.

And, on that note, what do these numbers actually mean? Everyone admitted to the hospital these days gets a Covid test. If you go to the E.R. with a broken arm and test positive, you’re on that list. If you have a heart attack and wind up in the ICU, and happen to have tested positive, you’re on that list too. And if you die with Covid, notwithstanding it may have had nothing to do with it, you’ll count there too.

So… look at all the pretty charts, because they won’t be around much longer. I have to be honest and say that I don’t think they’re conveying too much useful information anymore. You can see the hospitalization and ICU and death trends pretty clearly; they’re what you’d expect… and unless there’s some unheard of Omegaplex variant coming down the line, all of those charts should be going downhill (in the good way) forever. Every single graph shows where we are, and every single graph is in a much better place than it was a month ago… by far.

I suppose this is what the end-game of the pandemic is supposed to look like; it’s what it was going to look like all along… a fuzzy finish line at best. Initially, like two years ago, I somehow imagined a V-E day-type ending to all of this… where the announcement is made, the case-counts are near zero, the death counts have been zero ten days in a row and we’re all out dancing in the streets downtown throwing our masks in the air and hugging strangers. Nothing remotely close like that will happen, and the only people jamming downtown are the insane trucker anti-mask anti-vax “freedom” brigade who are on their way to Victoria to protest… to protest what? Nothing left to protest, but that won’t stop them, so we’ll see.

In fact, that’s a good motto going forward… it answers a lot of the rhetorical questions: Do you feel comfortable in a crowded place? We’ll see. Where nobody has a mask? We’ll see. And nobody had to show a vaccine passport? Honestly, speaking for myself, I don’t know. 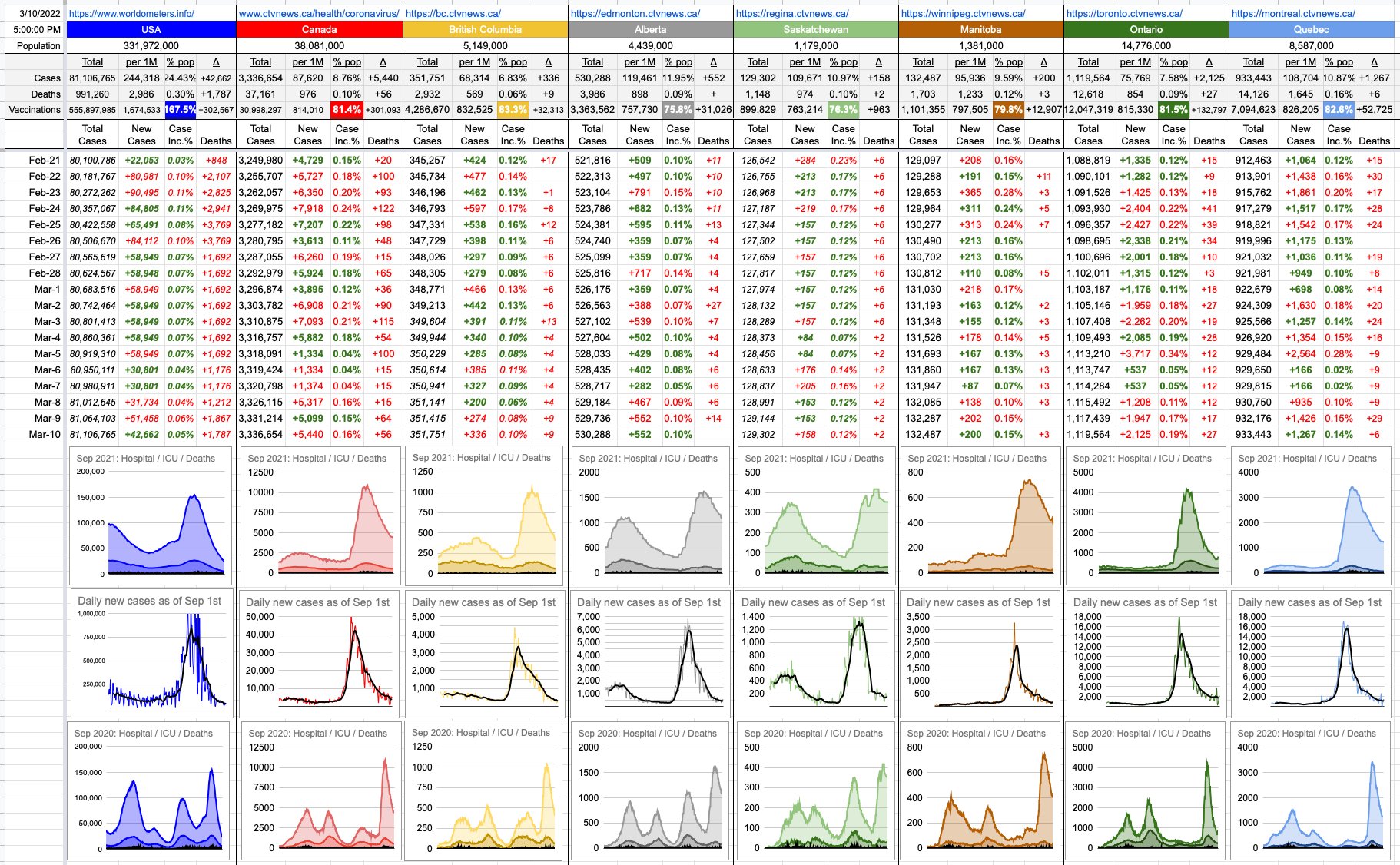