Last night’s debate was a lot more sane than anyone might have imagined. Kudos to the moderator, who did a far better job than anyone else has in previous debates.

Donald Trump, in poker terms, is down to the felt… the meager chips he has left were waiting for an opportunity to go all-in, and that’s what he attempted last night. Unfortunately for him, the hand he flipped over wasn’t too good. How it plays out remains to be seen.

Civility aside, the debate offered more lies than usual. Biden was off on a few points, but Trump was on a whole other level. We’re used to it from Trump, but that doesn’t mean we should let it slide. I’m not one of these people who usually screams at TVs or during movies, but I did find myself yelling “That’s bullshit!” or “That’s not true!” more than a few times.

Donald Trump doesn’t quite understand how ridiculous he sounds when he blames the high case counts on the fact that they’re doing a lot of testing… too much testing…more testing than anyone in the world, he claims… which isn’t actually true. On tests-per-million-of-population, the U.S. trails behind countries like Singapore, Denmark, Israel and Britain, to name just a few.

But that’s far from the point… because the logical conclusion of that nonsensical line of thinking would be to just not test at all – and then, like magic, no more cases… problem solved! In presidential terms, Mission AccomplishedTM – but it’s just not true, no matter how hard Trump claims it to be the case. It hasn’t just rounded the corner. It’s not almost gone. Things aren’t weeks away from being back to normal.

Indeed, his “It’s not so bad” claims are a little contrary to his “I’ve saved millions of lives with my actions” statements – neither of which are even remotely true.

Yes, it’s bad – how bad is it? Since the White House took over the numbers, it’s all a bit suspect. Case counts go down, but deaths (numbers not entirely in their control) don’t go down. Let’s ignore the case counts and go right to the guts of the matter.

Lies, damn lies, and statistics… The White House is reporting 229,000 deaths due to C19. Recent numbers released by those independent parties adding up the dead have found 300,000 excess deaths up to now, the vast majority of which can only be related to C19. That’s an under-representation of 24%.

This isn’t a trivial “What if” question to be answered, but let’s make it as easy as possible: What does Canada’s C19 response look like, mapped onto the U.S. population?

Either way, that’s a range of 143,000 to 214,000… so let’s call it somewhere in between: 178,000 Americans… that’s about how many have needlessly died up to this point, thanks to the president’s refusal to mandate masks, enforce lockdowns, and impose social distancing and responsible behaviour.

He couldn’t bring himself last night to admit he’s wrong, and why would he? It’d be admitting he’s been wrong for a very long time. Easier to blame everyone else. And for those who still feel they’ll be voting for Trump, I think it’s now the same sort of thing; if you admit you’re wrong now, there’s some version of you that needs to admit you’ve been wrong all along… and hey, perhaps you’ve never felt you’re wrong and never will. No worries; nobody is trying (or able) to change your mind.

But there are a lot of those undecideds out there trying to make heads or tails of it all… and it looks like this election may come down to what they ultimately decide. If nothing else, perhaps it’s best to go with the guy who lies less. A lot less. 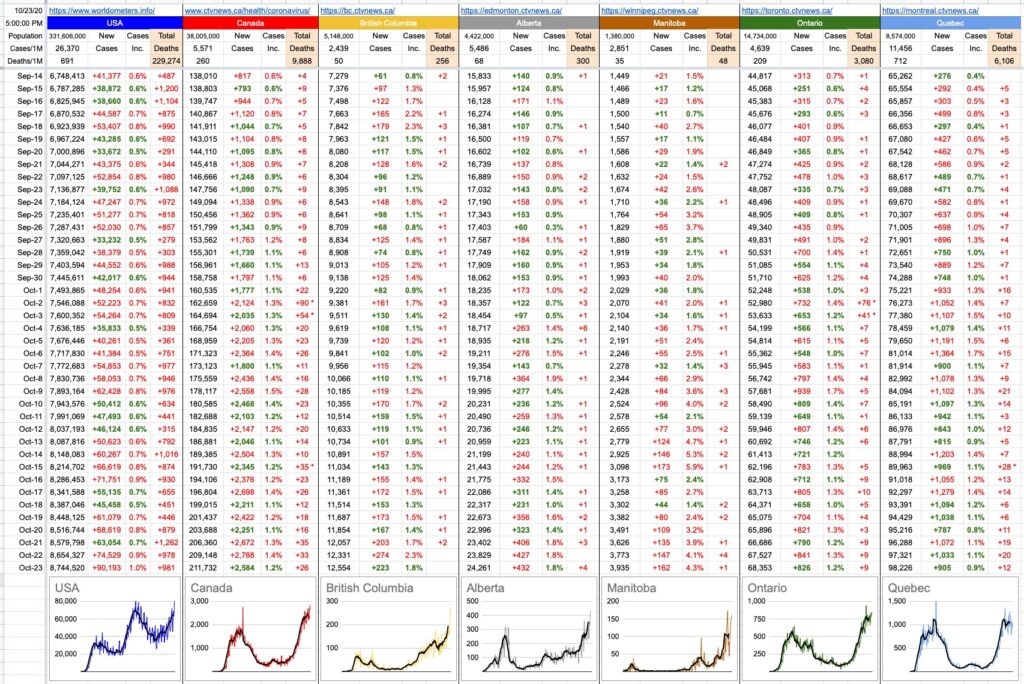