So at some point in the not-too-distant future, a person says to their robot… “Please go to the grocery store and get two steaks. And if they have eggs, get a dozen.” And the robot goes to the store, and comes back with… a dozen steaks.

This is a popular joke among computer programmers, because they’re the ones who get it right away. Indeed, computers are only as good as what you put into them, and the programming error that would lead to the twelve steaks is a common one. With computers, you need to be specific. You can’t make assumptions. If told to get steaks, it will get steaks. Computers aren’t smart enough to read into the obvious subtext that the human brain picks up instantly… and this is why the errors in the B.C. data that came to light yesterday can only be blamed on human error. Officially labelled “an IT error”, it’s more colloquially known as a “B.C.K. error” – Between Chair and Keyboard. Another common computer saying: Garbage In, Garbage Out. I’m thinking there may be someone looking for a job.

We don’t need to single out the health authority that messed up… but if you’re curious, their name sort of rhymes with “laser stealth”. Or “blazer wealth”. Given that it’s actually the provincial health region with the most cases, screw-ups there could make a difference to where we think things are at. Did it?

The ultimate changes are reflected in today’s numbers; all corrections have been applied, and I’m assuming with today’s data, we’re back on track. If you want to compare, you can flip back to yesterday’s post and see what changed. Side-note, if you’re looking at yesterday’s post, feel free to have a look at the comments, especially near the bottom…

Anyway, after it all shakes out, the end result isn’t too different. The provincial case count is 271 more than had previously been thought, a discrepancy of less than one percent. The interesting thing is how it got there… undercounts *and* overcounts. I could understand if there was data missing every day… or, double-counted, so bigger-than-expected numbers here and there. But both? That’s just… really bad.

As it turns out, if anything, the corrected numbers served to “flatten” the look a bit. But again, not materially relevant.

At the end of the day, these graphs, charts, and ultimate analysis are only as good as what goes into it. As per above, Garbage In, Garbage Out. 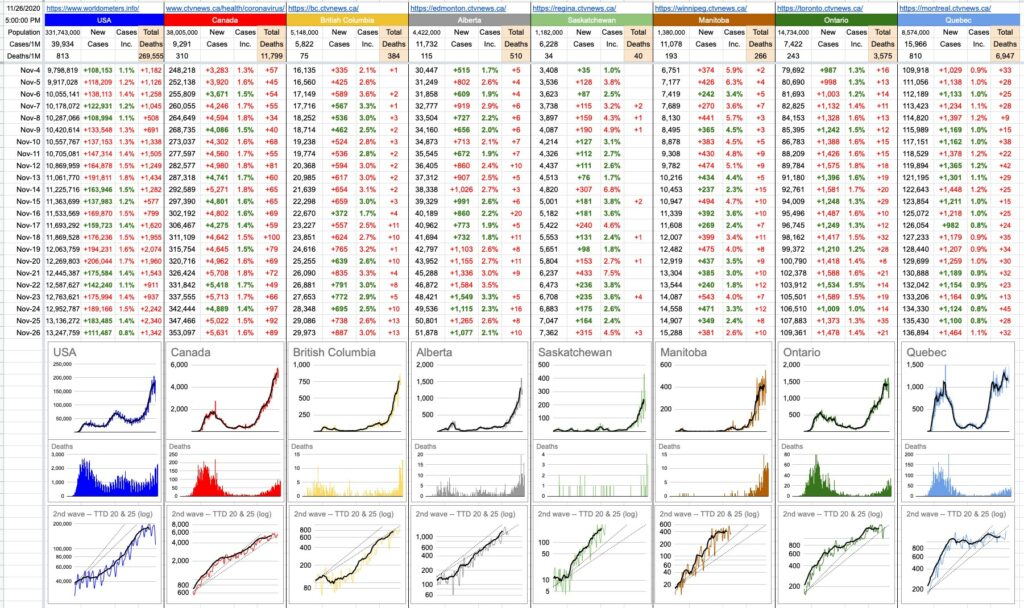