No local numbers plus sunshine equals a short update today… but on the topic of numbers, Dr. Henry has been taking a bit of flak recently.

For whatever reason, B.C. continues to be the only province or territory that doesn’t release numbers over the weekend… and, as transparent as they claim to be with their reporting, it’s not so easy to get all of the numbers in an easily readable format. On top of that, the worst thing that can happen is to lose trust in those numbers, and a few days ago we learned that a week’s data from Fraser Health was wrong due to technical problems.

Eight months into this, and all other provinces and territories are reporting 7 days a week. I think we could be doing better here, and I’m not going to blame Dr. Henry – she’s not the computer tech in charge of things. But… she is the top of the pyramid for many decisions, and I’m sure she could talk to the right people to do something about it. We’re not talking about needing a press conference seven days a week; everyone is entitled to a couple of days off, especially Dr. Henry… but, by this point, all of this data consolidation and reporting should be on automatic pilot. It’s not like there are 200 counties reporting; it’s a handful of health regions. Those key numbers could quietly appear on the website and/or a press release could go out, and that’s all that would be needed.

On the topic of numbers, I’ve made a guess at what today’s B.C. number will be, and plugged it in so we can see what it’d look like and how it’d affect things nationally. Left of The Rockies, take it with a grain of salt. Alberta and eastward is all accurate and up-to-date… and not pretty, especially Alberta. Some of these Time To Double graphs are getting steeper, though it’s all very inconsistent from a day-to-day basis. Nevertheless, I’ve taken a crack at trying to “bound” the increasing growth with appropriate TTD lines. If you look at the bottom row of graphs, you’ll see what I mean… the TTDs all vary, but give a more accurate view of where things are at.

A summary of what they imply is this: Things are bad in the east because the numbers grew quickly, and now have reached plateaus where things are not manageable. The drastic measures that have been imposed are an attempt to not just stop the rate of growth of cases entirely, but to dramatically decrease them.

And things are bad in the west because these graphs are consistently steep and not relenting. At this pace, B.C., Alberta and Saskatchewan will all have doubled their cases by the third week of December. It changes daily who’s accelerating a bit, and who’s slowing down a bit.

It’s like trying to call a horse race where you’re hoping to finish last, but unfortunately, these three horses, at present, seem to be battling it out toward the finish line. 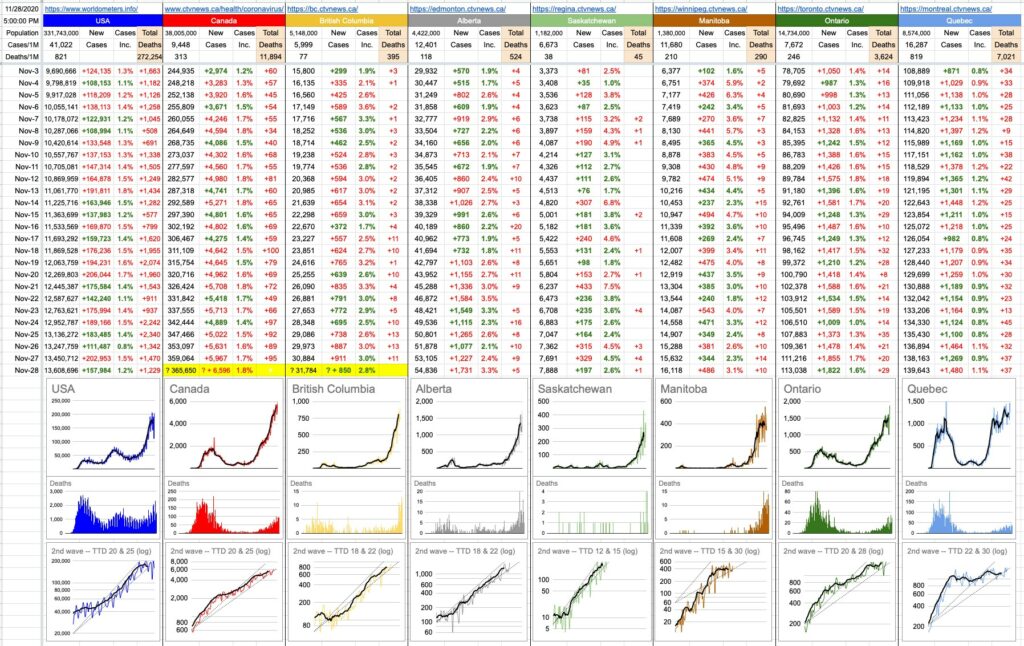