A brief footnote about yesterday and former Canucks-anthem-singer Mark Donnelly; the video of him on the steps of the Art Gallery is online. He makes a 10-minute rambling speech before singing, and to be honest, it’s kind of sad. He makes some good points, he makes some bad points, he makes some confused points, he spews some well-debunked conspiracy nonsense… like jeez, man… use that nice voice for something useful; this is pretty bad. At one point he criticizes the Canucks for their decision, at another he hopes he’ll get a call from them so they can talk about it. Near the end he yells, “Go Canucks Go!”; the crowd is so confused, they’re not sure whether to cheer or jeer. Fortunately, he eventually just shuts up and sings.

On a much larger scale of confused messaging, the president of the United States is in Georgia, speaking out of both sides of his mouth simultaneously. One side is encouraging Republicans to get out there and vote in what’s looking like a very tight senate runoff election. The other side is still screaming about how the federal election was a fraud and can’t be trusted and was rigged. If you’re a Georgian Republican, I’m not sure what you’re supposed to do. Or even think. The president called Georgia Secretary of State Brad Raffensperger an “enemy of the people” and called Governor Brian Kemp a “moron” and a “nut job”. Very presidential. Only 44 more days.

Setting aside the wise words offered to us by a former anthem-singer, and a former reality star/soon-to-be-former president, let’s reflect on the reality of the day… record numbers everywhere, in hospitalizations, ICU admissions and, unfortunately, deaths. The U.S. has over 100,000 patients hospitalized and is seeing around 2,700 deaths daily. Canada’s numbers are much lower… we’re approaching 2,000 hospitalizations, and the daily national death toll is averaging around 90… but what they have in common is that those numbers are all rising consistently.

Tomorrow we’ll get B.C. numbers and have a better idea where we’re at… but here are some good guesses: Canada will be up 1.7%, B.C. will be up 2.0%, Alberta will be up 2.9%… this isn’t rocket science; going across the table of numbers, you can see where I’m getting this from. It’s very consistent. It’s almost impressive how consistent Ontario has been; eight straight days of exactly 1.5% growth. There’s a finish line, but we have a long way to go. Where we’re at, and these numbers… they’re nothing to sing about. 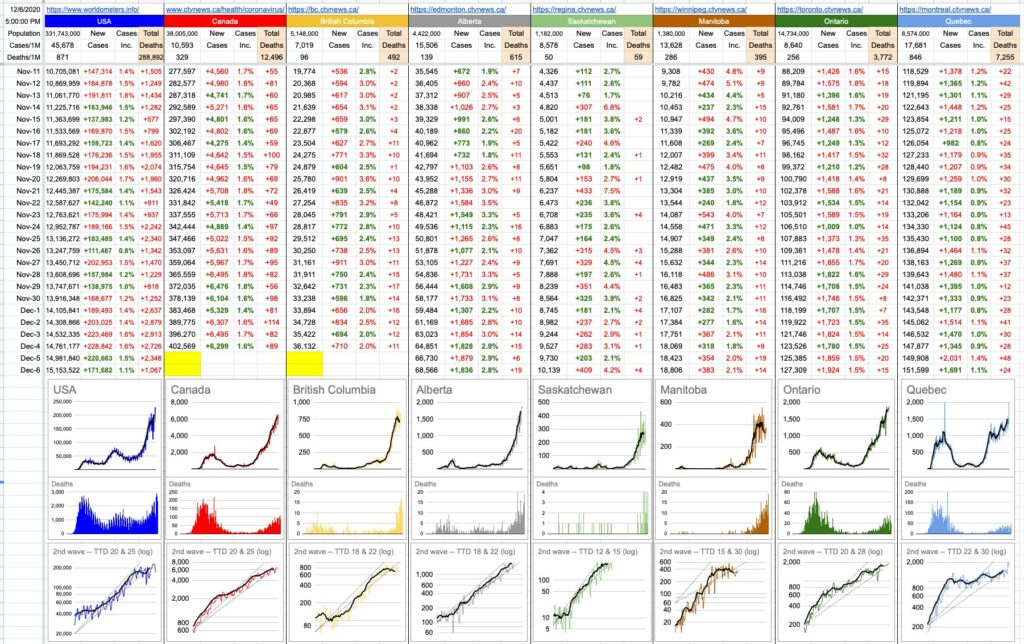