The Great Divide; it keeps getting wider… and every day is happy to provide examples to suit whatever argument you wish to agree with. If we were ever all together in the same boat, drifting in the same direction… well, that’s over. The river forked, and some went this way and others went that way. Depends who you ask. And yes, geologists, sit down… I know, rivers don’t do that… but you know what I’m trying to say… just trying to symbolize the ever-increasing gap in people’s opinions.

Like… It’s almost over! The U.S. border will be open soon! The Canucks are playing their first regular season game in over 18 months in front of a sell-out crowd!

Or… todays Covid deaths… 38 in Alberta and 11 in Saskatchewan… are more than we’ve seen since January. There are so many critically-ill patients in Saskatchewan that they’ll be sending them to Ontario hospitals. Yeah, here we go again.

OK, so what’s the deal? Where the hell exactly are we? Is it heading towards being over? Is it heading for a fifth wave? Will it ever end? We had such High Hopes.

Pink Floyd has a song called High Hopes… from their 1994 album “The Division Bell.”
The song contains lyrics like “The grass was greener” and “The light was brighter” and “The taste was sweeter”. How things were. And where we hope we’re once again headed… soon.

An interesting thing about that song… the eponymous (“relating to the person or thing for which something is named”) Division Bell itself plays a prominent role. You can hear it on every 4th beat of most of the song. One-two-three-DING one-two-three-DING… and I don’t mean some little “next, please” chime or a little sleigh bell… I mean an actual gigantic bell, the sort you see in a belltower of a mediaeval church. The song starts with lots of bells, but then just settles on this one… keeping that 4th beat. Then comes the wall of sound… the drums, the bass, the guitars, the keyboards, David Gilmour’s voice… but, by the end of the song, all of that has faded away and we’re left with nothing but… yes, you guessed it. When I purchased tickets for that concert, I was hoping they’d have an actual bell on stage.

Sidenote… I stood in line all night for tickets to that concert… and bought the maximum 6 tickets when it was finally my turn. I think 4 of the 5 friends who came to that show with me back in 1994 might be reading this.

Anyway, I was not disappointed. Prominently occupying the back of center-stage was a gigantic bell, and it well-served its purpose for the final song of the night; there was a solitary percussionist whose only job was to hammer it every 4 beats.

The persistence of it… they symbolism isn’t difficult to grasp. It’s not subtle… it hits you like… well, like being clanged by a bell-hammer every four beats: It doesn’t matter what’s happening now; it’s temporary. It’ll fade. But what came before and what’ll come again; that’s permanence. You can almost hear the bell ringing from a thousand years ago and ringing a thousand years into the future. But here we are for the moment and, as per above, where are we?

Before we answer that, it’s worth answering “Where should we be?” All things being equal, this pandemic should be over.

Let’s remind ourselves about R-naught (“Rø”)… a number which, at the start of this pandemic meant everything. Rø measures the “spreadability” of a disease by calculating how many people, on average, an infected person is themselves infecting. An Rø of less than one means the disease is on its way out. An Rø of greater than one means it’ll continue spreading.

The original C19 had an Rø of between 1.4 and 3.9. The Alpha variant doubled that. And then the Delta variant came along and doubled it again, to somewhere between 5 and 9. For comparison, a seasonal flu has an Rø of 0.9 to 2.1. Measles has an Rø of 12 to 18. We are closer to measles territory than a conventional flu.

If we had vaccines and treatments and no variants, this might all be over. There is a direct correlation with respect to herd immunity and Rø… and it’s exactly what you’d expect; the more infectious the disease, the more people need to be immune to it to prevent it from spreading. The originally-thought herd immunity level for beating this thing was around 70%, and with an Rø of 3, that’s about right. But now, unfortunately, it’s far from being the case. With the Delta variant, we need to be approaching 90%.

Originally, good hand washing and masks and social distancing and restrictions were thought to be the key… and they were. Without vaccines, all of those things help tremendously in stopping the spread, effectively bashing down the Rø because they prevent the virus from spreading unchecked. The world provided some examples as to what happens when you let that native Rø run its course, and it wasn’t pretty.

So… instead of a quick end, what we got is a far more contagious variant… and far more vaccine hesitancy/denial/insanity than anyone could’ve predicted. Those two things very-effectively have served to extend this… and, in essence, convert it from a pandemic to what’ll ultimately be an endemic disease that’ll be with us forever.

Well, here’s a funny thing. Much like a broken clock is right twice a day, when the fanatical anti-vaxxers scream that the scientists don’t understand this thing at all, there’s one particular aspect where they’re right… and it has to do with the mysterious 2-month cycle of Covid-19. One example of nailing the broken clock is this:

It seems, with some regularity, that when there’s a surge in cases, they seem to plateau after about two months and then drop off. Indeed, look at the numbers and pretty pictures and they all tell the same story. There’s a definite plateau off of the two-month surge, and in the U.S., who started down the path before us, a notable decline in new cases… 35% since September 1st. Indeed, worldwide, cases have dropped 30% since late August and when cases drop, so do hospitalizations and ICU admissions and deaths. The surge in ICU cases and deaths in Alberta and Saskatchewan today are due to the new case surges of two weeks (and longer) ago… but today’s new-case numbers are all, at worst flat, and, at best, a lot lower (more than 50%) from the recent past. Here’s a not-so-bold prediction: in a month, things in those two provinces (and Canada in general) will be looking a lot better.

Why is this happening? Nobody is too sure, because all of the variables have been written out of the equation. It’s warm, it’s cold, masks on, masks off, social distancing, easing of restrictions, vaccines. Whereas all of those things are treated very differently around the world, there’s a very evident pattern: Generally speaking, cases rose from February to late April, fell until late June, rose to highs in late August and have been falling ever since. In Canada, we were a little late to the party, so add a month to all of that. But the pattern is there. And so, Canada numbers will continue to go down, the border will open and Canucks fans will flood to Seattle for games and we will all be back to normal.

No, not quite… but given vaccinations and the pattern above, there’s reason to be optimistic. Those two things imply that the worst is over. And yes, it could change again. Pick an as-of-yet unused Greek letter, attach “variant” to it, and a frightening Rø, and you can throw the optimism out the window. There’s the other broken clock. We simply don’t know what we don’t know… and that’s why the bell keeps ringing, and will do so till the end of time. 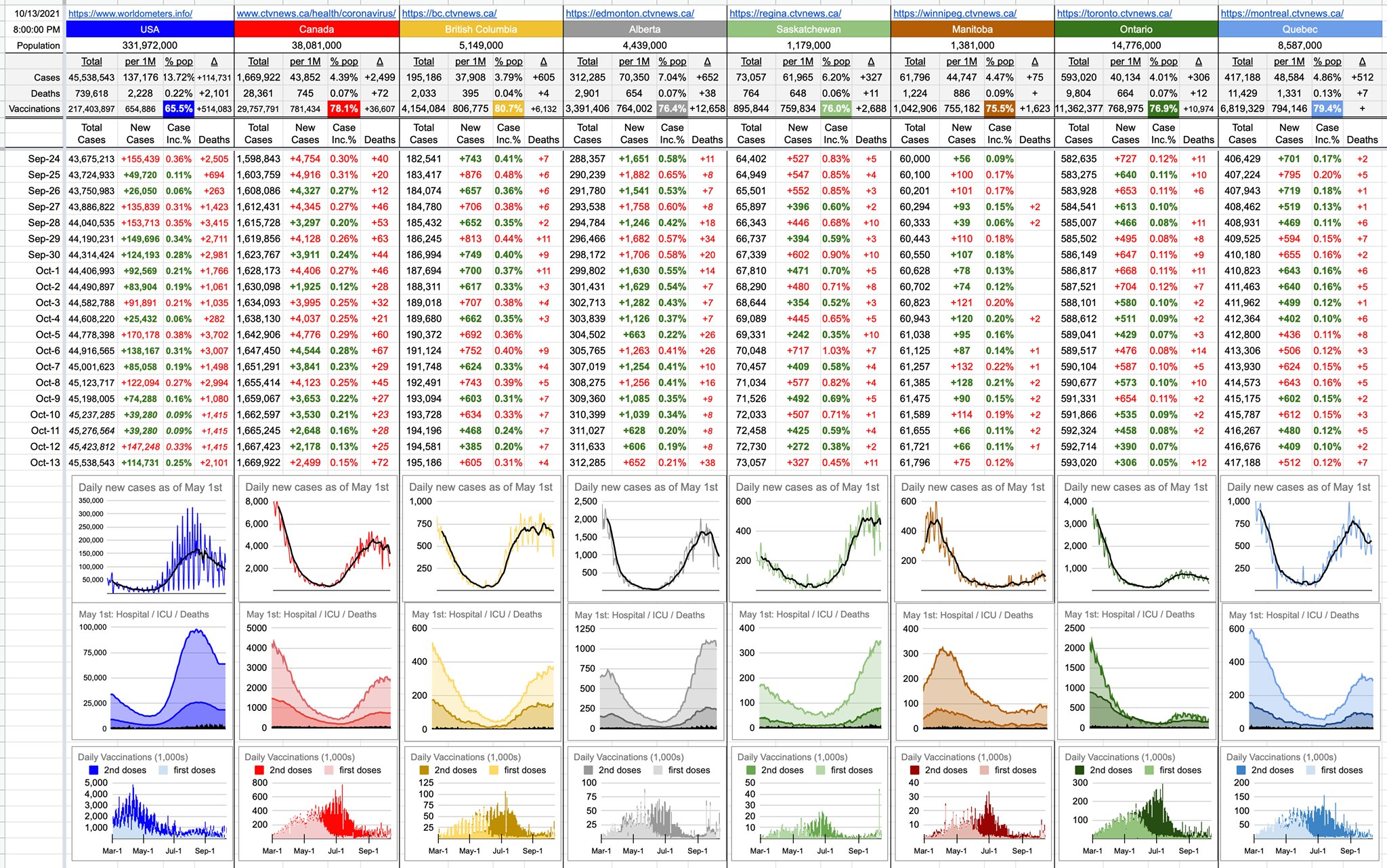