To follow-up briefly on yesterday’s poker analogy… we’re at the point where Joe Biden went all-in, and Donald Trump, hesitatingly, called… so Joe flipped over his cards; what’s colloquially known as “the nuts” — the unbeatable hand, because there’s nothing left to deal that can change anything. Trump is drawing dead, and can only helplessly watch the hand play out.

Normally, a player in Trump’s position would realize he’s beaten, flip over his cards, and watch the chips get dragged over to the other side of the table. But, of course, Trump is trying to bluff an unbluffable hand. Perhaps at some point, his fans cheering him from behind will be able to convince him to just face the fact that he lost, and move on. But it’s doubtful. Many of them continue to cheer him on blindly.

Notwithstanding that this may end up being a bigger victory for Biden than was originally thought a few days ago, there are a lot of posts from people wondering how it’s possible that a misogynist racist narcissist whose policies have further divided a country the desperately needs unity – not to mention his abhorrent handling and messaging of this pandemic – could have received so many votes? There are many takes on it, but it boils down this…

First of all, some simple math… rough numbers, some 144 million people voted. Of those, there is an unshakable core of Republicans who’ll vote that way no matter who the candidate. How big is that core? It depends how you measure it. Here’s a rough breakdown of Trump voters:

Within that breakdown, there are probably 40% who won’t be swayed, no matter what. And 40% of 144 million is around 57 million… so really, perhaps it’s only 13 million who “really” voted for Trump… and the vast majority of those are white men, and it must be noted that the urban voter turnout is what probably made the difference. The People Of Colour… Blacks, Latinos, Indigenous peoples… they showed up. In person, waiting hours to vote… or mailing it in… however they did it, they showed up. It’s no surprise that even in many Republican states, the big cities are hubs of blue votes.

On the flipside, the rural areas, many of them populated by people with very different priorities… Immigration, jobs, terrorism, the economy, national debt. Who cares if the leader is a jerk? These are the things that matter to me, end of story. My house and my job and my gun… mean more to me than whatever is going on elsewhere. Any by the way, for many people who’ve never left their own state, let alone country… “elsewhere” is everywhere else that’s not within driving distance. They couldn’t care less what’s going on in Portland or Kenosha.

While Biden got more votes than any presidential candidate ever, in second place is Donald Trump. His seventy million votes is what Obama got in 2008 when he crushed (365 to 173) John McCain. It should be noted that four years ago, when Trump beat Hilary, it was 304 to 227. And this was viewed as a huge victory, a demographic shift, a fundamental realignment, etc. It’s looking like Biden will wind up with almost identical numbers. So while it’s not a Blue Wave many hoped for, let’s not discount the inherent statement being made: No more Trump – spoken quite loudly.

The voting system may need a bit of thought, but there are no easy answers. It’s hard to fix it when there’s no agreement with respect to what’s broken. One thing about the electoral college system is that without it, given how fractured the country is, you might not see a Republican president elected again for a very long time. Biden is ahead by 4 million votes, but Hilary was ahead by 3 million and lost. In 2000, Al Gore won the popular vote by half a million and lost. In 1960, JFK crushed Richard Nixon 303-219… but won the popular vote by a ridiculously small margin, like 100,000 votes.

The sad truth is as that the chasm gets wider, like the rich get richer and the poor get poorer, the popular vote gap between Democrats and Republicans will widen… and that will, at least for the foreseeable future, be reflected in the left-leaning popular vote. Biden has his work cut out for him; he’s inheriting a mess on every level. I hope he, and the excellent people with whom I hope he surrounds himself, are up to the task.

A final, unrelated note… when I started writing these daily thoughts 235 days ago, it was supposed to be exclusively a daily update of C19 numbers and perhaps a paragraph with respect to where things are. It started to turn political when my daily research of what was going on south of here went from surprise, to incredulity, to anger, and all of it directly pointed at Donald Trump.

With him on his way out, and hoping Biden and his administration start taking things seriously, the daily bashing of American politics will be far less frequent. We have more important things to worry about. Here in B.C., almost 600 new cases in the last 24 hours… and I unfortunately know one of those people. Also, more than 600 in Alberta. And in Ontario and Quebec, more than 1,000 each.

The U.S. has its stuff to fix… they quietly reached 10,000,000 cases while all of this has been going on… but here, north of the turmoil, we have ours. 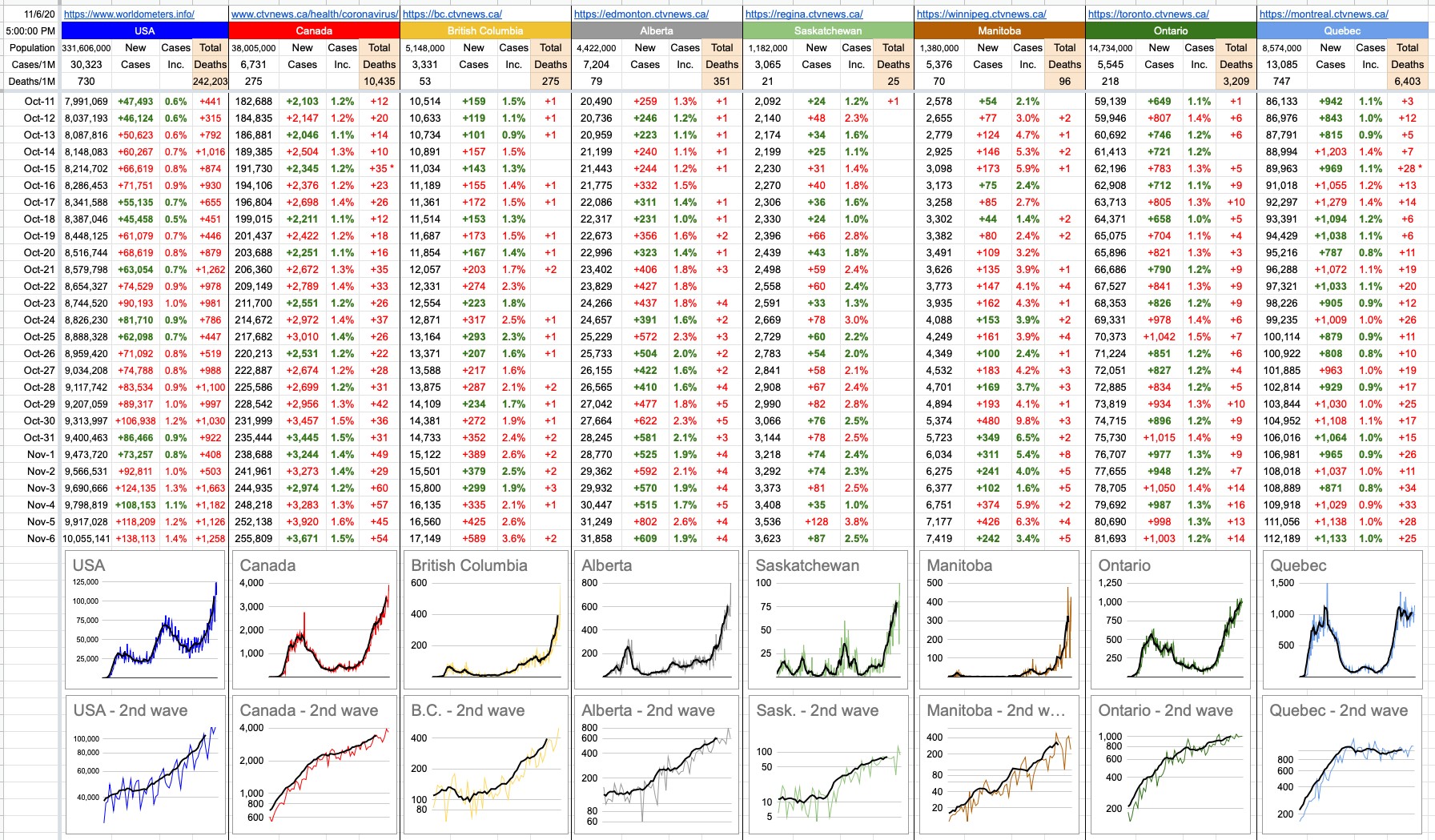