Earlier today, Dr. Henry laid down the law… a detailed and lengthy list of restrictions, which are now in place for at least two weeks (Dec 7th)… and this now applies to the entire province. The whole thing can be read at www.bccdc.ca – but here’s the summary… go back to how you were doing things in March and April: No social gatherings outside your immediate bubble. No non-essential travel. And by the way, masks are now mandatory. Finally, some clout behind the good sense. If you’re out in public, indoors, wear a mask. It’s that simple, and every business and every person walking into a business… needs to respect that.

As heavy-handed as it sounds, it’s with a finish line on the horizon… and the idea is to get there without overwhelming our medical system. The numbers don’t lie; if we don’t change course, we will run out of hospital beds and equipment before we get there… yet, we know there are people who won’t follow the rules. We know there are people who held lavish parties over the weekend. Heck, I know we’re not supposed to talk about it, but police in New York busted an actual Fight Club, with 200 fighters and numerous participants all crowded together. The U.S. went over 12,000,000 cases today… over 2,000 deaths today, for the first time. Almost 200,000 new cases today. Ouch.

It takes a while to see the effects of these orders… so, again, like back in March/April… we sit and wait… and hope things don’t spiral out of control.

From a flattening-the-curve point of view, when we’d actually flattened it… back in June, the cases Time To Double was 175 days. That dropped to 100 in July. In October, cases were doubling every 43 days. In the first week of November, that number dropped to 26. In the second week of November, down to 24. Right now it’s at 23. I’d be surprised and delighted if it managed to stay above 20, but nothing changed till today, so the trend that got us here is likely to continue before it turns around. Now, we just wait and see how much worse it gets before it gets better. 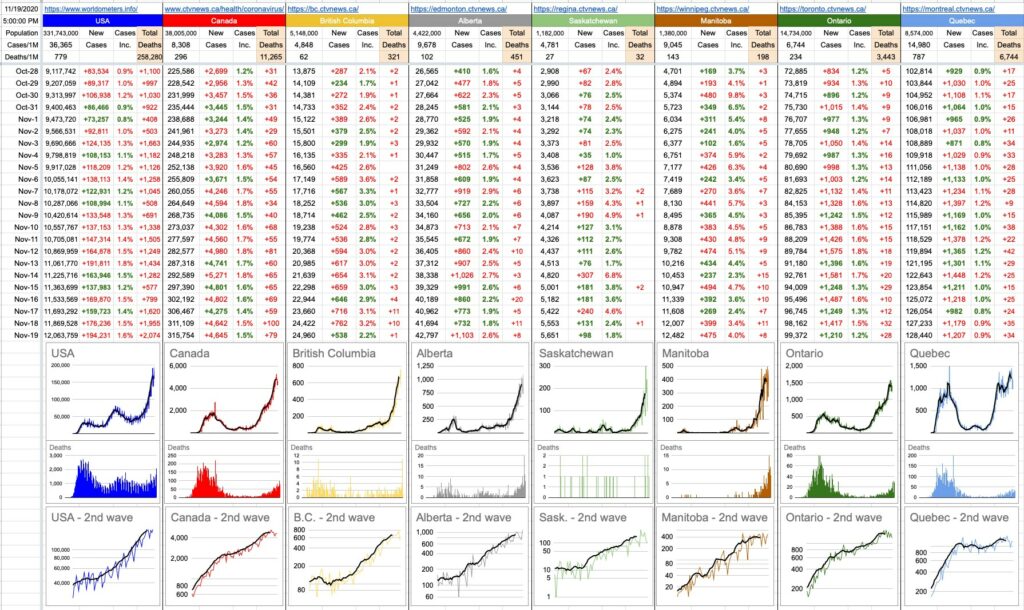